Added 7 years ago by admin
682 Views
Chronic movie buffs have minds that bustle with a zillion clever ideas. 'Drishyam' (Seeing) itself, suspiciously, is the result of such. Its protagonist uses ideas from the movies he's watched to continuously outfox the entire police outfit.

Cable TV owner, Georgekutty (Mohanlal), has been schooled only up to standard four and does not read the daily news. But he's good natured, and knows everyone and everything. On a day when he isn't at home, his wife Rani (Meena) and daughters Anju (Ansiba) and Anu (Esther) get their hands dirty. Something terrible happens by accident that shouldn't have.

The success of the scripting and dialogues lies in its effectiveness in empathizing with the common man. The wife and kids desire a better lifestyle. But the man of the house is a little tight with his purse, for he has larger hopes and dreams. They are an ordinary family which commits a mistake that could happen to anyone and find themselves locked up in an inescapable situation. The antagonist here is the supposed enforcers of the laws.

The opening take is very long, and stylish; and seemingly meaningless. The camera stares at the passengers in a moving bus till all the credits roll up the screen. Then, it gets down, and follows a man. When he enters a teashop, the camera walks around him, and observes his expressions as he orders a tea and converses. What the cameraman found so interesting in a bit actor may appear as something of a mystery. Until one realizes: it's just the producer doing a cameo.

The shots when people are seated around a table are unimaginative; mostly static. And ensure that some of the actors shift uneasily in their seats, clueless on what they ought to be doing with their hands. The lighting on certain occasions adds to the comedy: the hot fumes from the HMI bulbs actually float over the heads of the actors.

Keeping with the circumstances, the mother and daughters change the color of their respective skins. Kalabhavan Shajon too, in the role of the bad guy, a cop, puts up a striking performance. But the limelight belongs entirely to Mohanlal. Like the versatile greats of Hollywood, this actor possesses such a vast repertoire that he isn't required to always attempt the radically new to stamp his towering persona.

Jeethu Joseph's cat-and-mouse thriller, comprising elements that aren't exactly fresh, underscores the necessity of street smartness and alternate sources of information, for survival. And sprinkles glitter on the megastar. 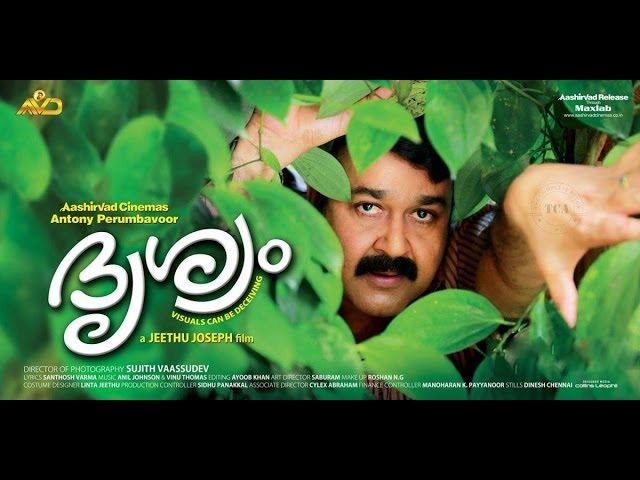 Chronic movie buffs have minds that bustle with a zillion clever ideas. 'Drishyam' (Seeing) itself, suspiciously, is the result of such. Its protagoni...